Have you ever wondered how pans work on an induction hob? In this article, we’re answering the question, ‘How does an induction hob work?’. Let’s explore how it helps you to create a range of dishes in the comfort of your own home. We’ll also discuss how you can experience improved safety in the kitchen.

How Does It Work?

Induction hobs don’t require much effort to make the stoves hot. They feature copper coils underneath the glass surface and create an electrical current that produces heat when in contact with certain pots and pans. Induction hobs don’t actually create heat by themselves but generate a magnetic field between the copper coil and the pan. Through this field, the energy reaches the pan’s surface, heating the pots and pans as opposed to the cooking surface, making it an energy-efficient alternative to gas hobs.

When you switch on an induction hob, you create a flow through the coil that produces a magnetic field directly above it. By generating a constantly changing magnetic field, an induction hob won’t heat up the surface but only the bottom of the pan. As a result, you can place your hand on top of the induction hob, and it won’t feel hot unless it’s recently been used for cooking. In this case, it may be a little warm.

Furthermore, when you place cookware on top of the glass hobs, the hobs’ magnetic field penetrates the metal. This magnetic field causes the cookware to heat up the food inside it by conduction (passing the heat energy straight to the food) and convection.

Whether you’re new to induction cooking or experiencing some issues with using them in the kitchen, here are some common reasons why your pans aren’t heating up.

You Don’t Have the Right Pots

First, consider what material your pots are made of, as this could be the main problem with using your cooker. As we previously mentioned, the hobs use an electromagnetic field to heat up only the pan. Therefore, you need to choose stainless steel pans that are compatible with this type of efficiency. For example, cast iron cookware won’t work, so check with your cookware to see if it’s right for induction cooking. You can do this by seeing if a magnet sticks to the bottom. If it does, then it’s suitable for your stovetop.

In addition, an induction cooktop requires proper placement of the pans for it to function. So even if you have stainless steel pans, you still need to place them correctly. For example, if the pan is edging over the burner area and is too small for that particular zone, you may notice that it isn’t heating up your food. In which case, try switching the pot to an area that’s best suited to the cookware size you have or move the pans to the centre position.

The Stovetop Doesn’t Have Enough Power 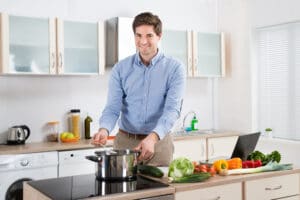 Another common issue with induction cooktops is not producing enough power to generate heat underneath your pans. If the stovetop has enough power, a light will indicate this.

However, if your induction hobs aren’t lighting up, there could be a fault with the circuit breaker. Your first point of contact is to check the junction box to ensure that the wires are properly connected and not damaged.

There’s a Fault With Your Burner

You may find that the copper coil on the induction hobs isn’t producing the electromagnetic field required to heat up the pans. If the coil has become faulty or damaged, you’ll need to replace it for the pans to work. Once you’ve removed the glass cover, you’ll have access to the copper coils, which are typically easy (and not too expensive) to replace. Simply disconnect the wire harnesses and depress the clips that hold them in place. At this point, you may have to remove the spring clips and attach them to the new model.

Your Cooktops Are in Lock Mode

One of the pros and cons of an induction cooktop is the safety aspect. Most feature a lock mode to ensure that they’re safe to use around children (particularly after use as the hobs can remain hot). Before you begin induction cooking, you’ll need to switch off this safety feature. Press the lock button, and it’ll display ‘lock’ if it’s not currently locked. Hold down the button for a few seconds, and it should create a sound and power off the light. However, if there’s no response when you press the button, you might need an electrical repair on the induction hobs.

Dinner preparations halted: induction hob child lock activated. How to turn it off?

Now that we’ve explored everything you need to know about an induction hob let’s look at some insightful information on how they work.

It’s common for an induction hob to generate some level of noise during use. This can include clicking, humming, or a low buzzing. Clicking is usually the result of the different layers of metals from the pans vibrating together at different speeds. Humming can often be heard when you have your induction hobs at high heat. Finally, a low buzz or whirring sound is often found when you’ve used the cooking stove, and it’s trying to cool down the electrics within the hobs.

Induction hobs can produce high amounts of heat quickly. And if you’re using a single zone for cooking pasta, a hob will take half the amount of time of a typical electric ceramic hob. However, when you begin to control more than one zone at the same time, the hobs share this electric energy around, improving the cookware’s energy efficiency. If you want to get the quickest, best results, use only one zone on the right and one zone on the left, rather than both zones from the same side, to preserve electricity on the cooktop.

The pan must be the same size as the zone that you’re cooking on. For example, a medium-sized pan won’t produce heat in a large zone. This can be difficult to cook food if your pans aren’t the right size for the hobs. In which case, we recommend choosing an electric cooker that’s flexible to suit your needs or at least that it features the same sizes and shapes as your cookware.

The Difference Between a Ceramic Hob and Induction Hob

Although they are both easy to clean and may look similar, they are not the same in function and design. Let’s explore some of the differences between these two different ways of cooking.

An induction hob requires and uses less energy because it’s only heating the pan rather than the area surrounding it. On the other hand, a ceramic hob requires more energy to heat the cooking zones. Furthermore, the electric cooker stays warm after you’ve finished cooking. 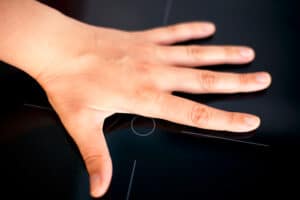 Cooking with an induction hob is much safer, particularly if you have young children around the hob. This is primarily because an induction hob has a child protection feature, so a child can’t change the settings.

A ceramic hob doesn’t cool as quickly after use, which makes it more likely for a child to burn their fingers—especially because the red light can dim even while the temperature is still high.

Many induction hobs come with flexible cooking zones, which means that you can use one large zone or multiple zones at the same time. And it all happens at the press of a button, making it user-friendly and flexible.

If you’re in a rush or hungry, you may want the hob to heat up quickly. Fortunately, induction hobs don’t use heating elements, which means that your pan heats up in as little as 20 seconds. Alternatively, a ceramic hob can take up to two minutes to heat up, but all pans are suitable for this type of cooking.

Cooking pasta for the first time with magnets (new induction hob) and it’s v.quick and makes the pasta into a doughnut pompom shape pic.twitter.com/NTgCdyywjq

So how does an induction hob work? It works by using electric current to produce heat. We hope you enjoyed this article. These electrical appliances are easy to control and clean, simple to work, and they let you produce a range of food dishes.

Do you have any tips for operating one? Let us know your thoughts in the comments.