Inexpensive, easy to use, and a highly convenient way to healthier home-cooked meals, there are numerous reasons to invest in a slow cooker. But just how does a slow cooker work its magic, transforming cheap cuts into tasty, tender dishes? Let’s take a closer look and find out all there is to know about slow cookers, as well as how to use one.

What Is a Slow Cooker?

Slow cookers are small kitchen electrical appliances used to cook food on low heat over several hours. You may also hear them referred to as a “crock-pot”, after a popular slow cooker brand. They are a mains-operated, one-step cooking appliance that you can set-and-forget, making them an excellent choice for busy weekdays.

All slow cookers have three main parts—a heated base, cooking pot, and lid. Most will also have some kind of display and a timer. There’s often a temperature control with a high setting, low setting, and maybe a keep warm setting.

These kitchen tools are available in a variety of sizes, from small two-person capacity slow cookers around two to three litres, up to seven litres for large family meals.

Not only are slow cookers much loved for their simplicity and convenience, but they are also extremely popular for making deliciously tasty, hearty meals out of cheap cuts. So, you will save time, as well as also saving money on your food bills. If you use a slow cooker rather than your hob or oven for several hours, your energy bill will be reduced, as they are also highly energy efficient.

Thanks to their convenience, a slow cooker can be a great way to enable busy families to cook tasty food from scratch. Aside from saving money, it also a great way to cook healthier meals and gives people complete control over exactly what goes into your food, unlike shop-bought ready-meals.

How Does a Slow Cooker Work? 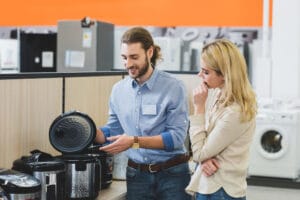 Slow cookers work by cooking your ingredients with a steady low heat over a longer cooking time than other cooking methods.

Once your appliance heats up and reaches the simmer point, it cooks your ingredients at that temperature for cooking times of several hours. The cooking process relies heavily upon the slow cooker’s lid being securely closed throughout the duration to minimise heat loss. This is why most models have a heavy glass lid or vacuum seal.

As your food heats up in the pot, slow cooking causes the moisture to rise. However, the moisture is unable to escape and condenses back down from the cover. As no moisture is lost and the heat is kept consistently low for a long time, your meal won’t dry out or need stirring. For this reason, even if left cooking at a low setting for 8 hours, it won’t catch on the bottom, unlike leaving a pot on your hob for hours on end. The heating element uses very little power, too, so it won’t ramp up your energy bills.

Not only does the locked-in moisture give you very soft and tender slow-cooked results, but it is also responsible for the incredible depth of flavour that you can get from using a slow cooker. Provided you don’t lift the lid, all of your food’s goodness remains inside your cooking pot for a maximum amount of taste.

Are Slow Cookers Easy to Use?

Using a slow cooker to prepare a home-cooked meal is a very easy process. Simply prepare your ingredients, place them in your slow cooker cooking pot in accordance with your recipe, replace the cover, and select your time and temperature options. Go about your daily business and come home to a piping hot, ready-to-eat meal.

Provided you follow the instructions provided by the manufacturer and use a slow cooker recipe, you can use the slow cooker for your meals while you’re working or out running errands. It really is that simple. However, if you are new to slow cooking, or just want to know a little more on how to use your slow cooker for the best results, here are some of our favourite crock-pot usage tips.

Slow cookers are by far one of the easiest kitchen appliances to use, having very basic settings. Prepping your ingredients beforehand can usually be done in just minutes and your food needs no watching over or stirring as it transforms into a scrumptious meal.

What Can I Cook in a Slow Cooker?

Slow cookers are highly versatile. A quick search online will tell you that there’s an unbelievably long list of slow cooker uses. This nifty cooking tool can be used to cook much more than your standard stew consisting of meat and vegetables.

However, if you are new to using a slow cooker, make sure you start out by trying some specific slow cooker recipes. These are adapted to ensure that the ingredients, times and quantities are perfectly adapted for slow cookers.

Once you know how to use a slow cooker, you can try adapting your own recipes. Slow cookers are an excellent choice for a wide selection of meals including curries, casseroles and joints of meat. Here are some of the most popular ingredients to use and what you should also avoid when whipping up slow cooker meals.

What Not to Cook in Your Slow Cooker

Do You Have to Put Water in a Slow Cooker?

If your slow cooking recipe recommends adding water, then go ahead. Likewise, if you are cooking a stew, casserole or soup, you will want to add a small amount of cold water. However, remember that unlike cooking on your hob, water is retained in your slow cooker. If you are using a standard recipe, you may need to reduce the amount of liquid added by up to one third.

Another issue to consider is the level inside your slow cooker. Make sure you do not fill to above the two-thirds mark. Even if you are making a soup, you still won’t want to add any more, or you’ll risk your slow cooker creating a mess. It could also end up taking much longer to heat up fully, meaning your meal could be undercooked or even unsafe to eat.

So, make sure you reduce liquids when using your slow cooker. While some liquid is beneficial, remember a lot of your ingredients will create extra moisture. In general, depending on your specific recipe, you’ll probably want to just about cover your ingredients or slightly less.

If you have followed the recipe instructions and still need to reduce the amount of liquid in your slow cooker to thicken your sauce, then you can run it after the cooking period without its lid for another hour or so while you’re in the kitchen.

Is It Safe to Leave a Slow Cooker on All Day? 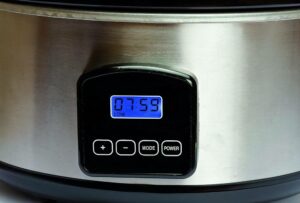 Slow cookers are definitely a must-have kitchen appliance. Easy to use, convenient, and affordable, they are an excellent way to “hands-free” slow cooking. No more standing over pots and pans required, you are free to get on with your busy life.

From joints of meat to curries, stews and casseroles, slow cookers are the best way to enjoy tasty home-made meals without the hassle now that you know exactly how does a slow cooker work.

Do you have slow cooking tips? Let us know in the comments.