There are numerous benefits to induction cooking, but if you’ve moved into a new home and your landlord hasn’t specified the type of cooker you have, you may be wondering if you have an induction hob. In this article, we’re exploring the question, ‘how do I know if I have an induction hob’, along with several factors to consider during operation.

Another way to see if your appliance is an induction hob is to see if the surface gets hot when you switch it on. Because an induction hob heats up the cookware and not the glass itself, the cooktop will remain cool to touch. In which case, you can often touch it without burning yourself.

In addition to this, if you don’t have the right cookware, it will not work at all. Some induction hobs may show an error signal if you are not using the right pans or if they are unable to work.
An electric hob or a ceramic hob will begin to heat up as soon as you turn it on and do not require specific pots and pans to function. Even though the surface of a ceramic glass hob may look very similar to an induction hob, the workings underneath are very different. 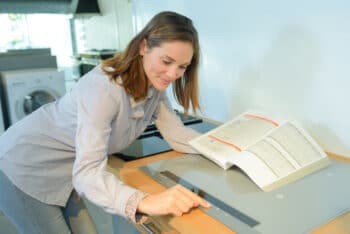 Once you’ve established that you have an induction hob, it’s time to look to the different types of cooking zones on the cooking appliance. Similar to ceramic hobs, the common number of zones is four. There are three-zone hobs available, but this isn’t the most common choice used.

Alternatively, you can opt for induction hobs that are zoneless, allowing up to five pans in any area of the hob. This makes it ideal for easy cooking as you can quickly put the pan on top, and it’ll get hot within a few seconds, no matter where you place it. This type of induction hob heats up water in a fraction of the time of other cooking appliances.

Induction hobs are usually made from black glass and do not look dissimilar to electric or ceramic hobs.

An induction hob has a magnetic field instead of a flame that heats the pan. Therefore, you won’t see any flames present, but the zones will produce a red lighting effect on the surface once it becomes hot. This look keeps you informed that the heating element is ready for use and working.

Moreover, these cooktops will usually come with a safety feature. There’s a child lock function so that it’s not a disaster when little ones become curious in the kitchen.

What Happens if You Use Normal Pots and Pans for Induction Cooking?

Nothing bad would happen if you used normal pans on an induction hob. However, the hob won’t heat up the pans, meaning that you can’t cook food. This is because induction cooktops don’t get hot. Its the electrical energy that runs through them that will heat up the food, unlike other hobs that use flames. Therefore, you need a magnetic pan. Otherwise, it won’t heat up when you come to work it.

yep! Though I just found out my new place has an induction hob so I need to go shopping for new pans first!

Fortunately, cooking with induction hobs is energy-efficient and easy to clean. However, that doesn’t mean that the surface is resistant to scratches and stains. In which case, we recommend cleaning the hobs after use by wiping them down with a damp, soft cloth.

You may want to purchase a scratch remover product if you’ve noticed that the surface is looking like it needs a gleam. Since the outer body of induction hobs is made of plastic or steel, it’s usually durable and won’t scratch easily. However, the top layer is made of glass, which is durable and retains heat well but can be scratched. Avoid using any rough materials on the tops, and use a soft cloth that’s suitable for the delicate hobs. We also recommend choosing magnetic pans with a smooth, flat base to prevent any scratches. These are easy to find, and a lot of magnetic pans are made in this way.

Are Induction Hobs Bad for Your Health? 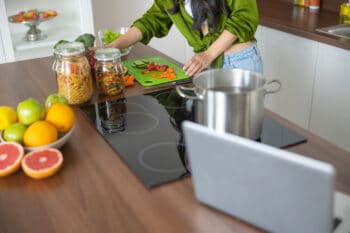 Induction hobs create electromagnetic waves, which means that those with a pacemaker should refrain from getting too close to the electric wave (or refrain from using one altogether).

However, these waves don’t create any harm to human health as the level of radiation emitted is low. Furthermore, as these cooktops don’t emit heat, they won’t produce carbon dioxide or burn oxygen. Therefore, the negative effect of induction cooking is very low.

Can an Induction Hob Create a Fire?

No, because the elements themselves don’t heat up. However, you should never leave pans unattended when cooking and follow suitable safety precautions. For peace of mind, induction cooktops switch off when a pan is empty or when water boils over.

Do You Have an Induction Hob In Your Kitchen?

Answering the question, ‘how do I know if I have an induction hob’ is important to be able to make the most of your kitchen. Knowing what cooker you have means you’ll be better equipped when you buy new cookware. You’ll also be able to manage your time well when preparing your meals.

If you have an induction hob at home, we’d love to hear from you. Let us know your thoughts and any operating tips in the comments.