So, who invented the ironing board?

It’s a common question, and not many people know the answer. The actual inventor of the ironing board was Sarah Boone, an incredible woman who fought tooth and nail to ensure that her creation would make it into the homes of people all around the world.

Today, the ironing board is one of the most popular products in any home. It’s hard to imagine that anyone would go without this tool to make ironing faster, easier, and more effective. But without one wonderful African American invention, we may still have been ironing our cloth on tables and floors to this day!

Here’s what you need to know about Sarah Boone’s ironing board.

Introducing the Lady Behind Our Smooth Apparels 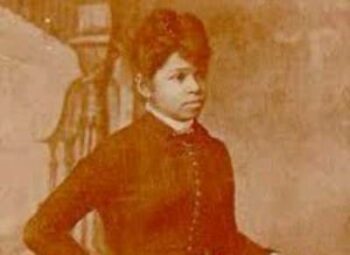 Let’s start with an introduction to the lady who invented the ironing board.

Sarah Boone was originally born as Sarah Marshall on January 1, 1832. Unfortunately, Sarah Marshall was a former slave before she married a freeman, James Boone, at the young age of 15. It didn’t take long for Sarah Marshall (now Sarah Boone) to become a mother.

She had a total of eight children. The family moved from Boone’s birthplace in New Bern, North Carolina, to a town called New Haven in Connecticut. The couple happily settled down together at a point in history just before the civil war.

Sarah Boone’s husband, James Boone, was a professional brick mason, while Sarah Boone made her living as a dressmaker. This is where Sarah’s idea for ironing boards began.

As a dressmaker, Sarah Boone knew better than most how difficult it could be to remove creases and wrinkles from her creations. Like most inventions, the concept for ironing boards came from necessity urging this African American woman to create a solution to her ironing problems.

To improve her skills as a dressmaker and make ironing more efficient for every woman, Sarah Boone started experimenting with ironing board designs. Although certain ironing board technology was already available at the time, it wasn’t nearly as efficient as the creation that Boone would make. The traditional ironing table often caused a number of unwanted creases in clothes and made it harder to get the right results.

Like many women in her time, Sarah Boone was facing fierce competition as a dressmaker, and she knew she had to do something different to catch the eyes of her customers. She believed that creating a device that would improve ironing could be her way to outshine her competitors.

Up until Sarah Boone’s ironing board arrived, most women were ironing their clothes on wooden blanks placed across two chairs. Though this method was suitable for ironing wider skirts, it wasn’t helpful for ironing tight, fitted material. The solution Boone came up with was to create a narrow and curved board that would slip into sleeves and support the movement of a garment without causing wrinkles. The invention was also padded, which helped to reduce the impressions created by the wooden board that people were used to.

The Quest for the Ironing Board Patent 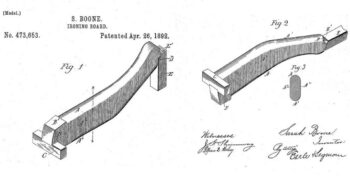 After designing a significant improvement on the existing ironing board or kitchen table that women had used until then, Sarah put her writing skills to the test. Boone was a well-educated African American lady with a solid understanding of how the world worked. She wanted to protect her status as an inventor and stop people from taking advantage of her invention.

Bone applied for a patent for her ironing board in July of 1891. This marked a massive achievement for women and African American citizens of the time. The ironing board patent was officially approved about nine months after the patent was filed, on April 26, 1892.

Today, Sarah Boone stands out as a memorable inventor not just because of her invention but because she was one of the first African American women to obtain a patent. The folding ironing board quickly became associated with Sarah Boone and her family.

What Made This Ironing Board Extraordinary?

Irons existed in almost every home and dressmaking business long before the invention of the ironing board. Most women throughout history to that point used various solutions for ironing clothes and bed linen – from ironing items on their tables or floors to using wooden boards to keep pieces of fabric straight. As mentioned above, the traditional ‘ironing board’ for most people was two pieces of wood placed across two chairs. The home ironing board clearly wasn’t very effective.

The ironing board that Sarah Boone made was curved and narrow, designed to fit the clothes that women wore in those days. She clearly put a lot of thought into her invention because the ironing board ended up being reversible. This meant it was much easier to use irons on both sides of a sleeve.

Collapsible legs meant that you could easily move the board and store it out of the reach of children. Plus, the padded surface of the ironing board ensured that dressmakers and other users could remove all creases with ease.

The new invention from Sarah Boone made her one of the most valuable inventors of the day. The board catered to women’s clothes, like the ones she made, but it was suitable for other things, too. According to Boone, her invention could be adapted to suit men’s clothes by using flat boards for cutting and styling.

Has the Design of the Ironing Board Changed?

Sarah Boone passed away in 1904, but the legacy she created with her improvements to the ironing board lives on even now. Though an old-fashioned version of the ironing board was patented by Elijah McCoy long before Sarah made her design, she’s still the person who dominates the history of these handy devices.

A true innovator during her time, Sarah Boone is a lady who deserves much more attention in modern society. She was the one who changed the way we handle complicated ironing forever and made it easier to create all kinds of new styles. Without the ironing board created by Sarah Boone, who knows what we would have been wearing today?

What started as a product that would make ironing sleeves easier and helped create tighter-fitting dresses quickly became a life-changing invention. The ironing board made by Sarah Boone was a cheap, convenient, and simple solution that homeowners all over the world continue to celebrate today.