The circular saw is one of the most popular and helpful power tools available. It is widely used for home improvement projects, general DIY, woodwork, and construction. But where did this power tool come from? Who created the first prototype, and what era did it appear? In this article, we look at when was the circular saw invented and its history!

What Is a Circular Saw? 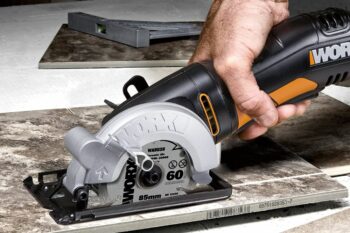 Let’s first take a brief look at the circular saw and what it is. Circular saws come in different designs and styles. However, the common factor is that circular saws cut using a rotary action instead of a traditional hand saw’s back and forth motion.

The term circular saw is used for both the tool itself and the cutting blade. These inventions are often used in sawmills to cut lumber and wood. However, the more heavy-duty blades can saw through other materials, including a cement block, bricks, tiles, and concrete. They are versatile tools that are used in a myriad of different industries.

There are generally three main types of circular saw – a table saw, a single-hand saw, and a dual-hand saw. A table saw is a larger device that sits in a fixed position – the blade doesn’t move. Instead, you push the lumber or other materials onto the circular saw blade to perform the cut. These are generally used in sawmills and for cutting larger materials.

Who Invented the Circular Saw?

The use of saws and circular saw blades dates back to prehistoric times, although the information and reliability are not concrete. For example, evidence has been uncovered from archaeological sites in Lothal, Gujarat. However, in this article, we concentrate on the modern history of circular saws, starting during the 18th century.

The invention of the circular saw and when it was first developed are still unclear, however. As you can see below, there are several well-known claims, and we have detailed the most prominent. What is clear is that the modern circular saw was an 18th-century invention.

In the United States, the name Tabitha Babbitt is most commonly associated with the invention of circular saws. Babbitt was a woman from Harvard, Massachusetts, and part of the Shaker religious sect. It is reported that she gained inspiration for the circular saw’s invention whilst watching two shaker men working in a traditional pit saw.

She noted how tedious and inefficient this method was and sought to make improvements. The main issue was that the blade would only cut on the forward stroke – therefore, on the return stroke, energy was wasted without any gain.

As a result, one of her inventions was a notched tin blade that would operate in a rotary motion when connected to her spinning wheel. All she would have to do is push the pedal of her spinning wheel, and the metal blade would rotate! After initial testing and trials with the spinning wheel, the inventor helped create a larger version used in their sawmill. The design caught traction and, over time, was modified and used by other communities and businesses.

1812, Tabitha Babbitt invents the circular saw. After seeing people struggling to cut wood with a pit saw, she attached a circular blade to her spinning wheel and invented the much more efficient circular saw.#WomensHistoryMonth #Engineering pic.twitter.com/yhYSlHQJ3y

Walter Taylor was an engineer from Southampton in England. He supplied many ship pumps and rigging blocks to the British Royal Navy, which greatly improved its versatility and quality. Within his company sawmill at the docks, he had various table saws and machines that included circular saws.

Although he patented various machines and indeed used circular saws, there is no evidence to point directly to Taylor being the inventor.

A common interpretation of the development of this machine is with the inventor and sailmaker Samuel Miller in 1777. Miller was from Southampton in England and obtained patents for a saw windmill. This was British Patent number 1152 and is mainly regarded as the first patented circular saw machine. 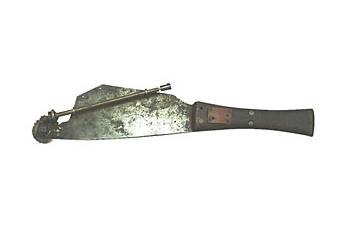 Michel was an immigrant who moved from France to the United States during the early 20th century. He is commonly accredited with inventing the first handheld circular saw.

This early design was quite impractical as it needed an external energy source to power it. However, it could cut wood and other material effectively.

The handheld circular saw utilised a machete handle with a 6-inch circular saw blade and gearbox power source mounted into it. These tools quickly gained popularity despite their unwieldy usage, and Michel eventually created a patent for the first circular hand saw.

Moving forward in time into the 20th century, different inventors and companies utilised the circular saw in different ways. One significant development was the radial arm saw which used a circular saw blade. Raymond Dewalt invented this in 1922. He was the founder of the famous DeWalt company that still exists today.

The radial arm saw was essentially a saw table design incorporating a circular saw blade held in place via a horizontal arm. This saw would allow the material to be placed on the supporting block and pushed easily through the saw blade, thus creating an efficient cutting method for smaller pieces of wood.

Besides starting DeWalt in 1923, Raymond DeWalt also invented the radial arm saw in the same year. His original design for the radial arm saw was sold under the moniker Wonder Worker. #TuesdayToolTrivia #ThePowerToolStore #DeWalt pic.twitter.com/YjiQU55jFh

An Interesting History of a Fantastic Tool

When was the circular saw invented? Evidence of circular saw use goes way back to the prehistoric ages, but the modern circular saw is an 18th-century invention. Babbitt has the most compelling claim and the best evidence to support that she created the original design. On the other hand, we cannot overlook the other claims and work that other inventors created.

Have you used a circular saw before? Do you think it’s essential for woodworking projects? Share your thoughts in the comments.